A relative newcomer, Cappa has a sound that places her alongside the likes of Halsey, Lorde and even Carly Rae Jepsen.

Queen of Hearts will be your anthem for late night makeout sessions in the backseat of your boyfriend’s car. Its latest single “Next Ex” is an amazing track that perfectly introduces Cappa and the EP. Throw on some headphones and frolic around to six sing-along-ready tracks over an ice cream sundae that’s as sweet as Cappa’s music.

Cappa is currently on tour with Matt Wertz! Make sure to grab some tickets in a city near you to catch her live set this Fall! Buy tickets and see the dates: HERE

Listen to Cappa‘s Queen of Hearts via Spotify below: 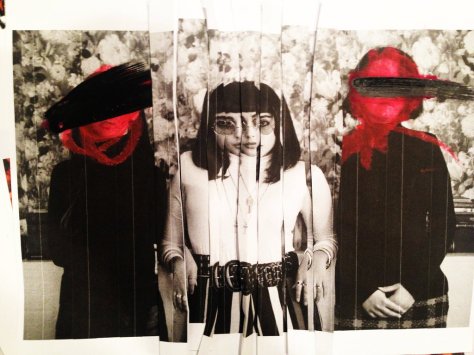 +30mg begs its listeners to drown out their problems and surroundings with the hypothetical self-prescription from a handful of oxies. Cruel Youth takes aim at the masochism and vanity of youth and relationships throughout this project. The EP flirts between the lo-fi doo wop of the fifties and current urban beats with songs like “Alexis Texas“. +30mg is a musical experience of escapism and a satisfying piece of work from the band.

Cruel Youth is also touring this Fall in the U.S. and Canada. Get tickets and check out all their dates: HERE

Listen to Cruel Youth‘s +30mg via Spotify below:

2015’s most hated rapper sounds more insecure than ever.

Nothing is more enjoyable to me than seeing the underdog come through and succeed from hardships and doubt. Iggy Azalea‘s career has been chronicled in a more than messy way; she’s received little respect from the hip-hop community, she’s canceled an entire tour and even Britney Spears couldn’t revive her after being 2015’s black sheep. With that said, there would be no better person to watch succeed right now than Iggy. Will she though? Most likely not.

“Team” is a mildly powerful anthem for one-woman armies and lone wolves as a standalone track. However, for her career, it is pushing away any chance for Iggy Azalea to garner sympathy or show any artistic growth — which she desperately needs. Its production is simple but not horrible… Mostly the song is nothing Iggy can scream, “victory!” for.

The song does not allow Iggy Azalea to distance herself from the terrible press and controversy that plagued her after the success of 2014’s big hit, “Fancy.” Instead, it plays like a needless and bratty response to the flack from then that she should have already lived past. Iggy wants so badly to be respected as a rap queen, yet continues her tirade that no one’s opinion matters but her own. If that’s the case, she should stop throwing it down our throats that she’s “Fancy,” “Azillion” and on her own “Team.”

She found the most success succumbing to a pop-rap novelty with “Fancy” and “Black Widow” and should have stayed there. She could easily win back everyone’s interest by providing a slew of radio-ready hits to let us forget how unpopular she was last year.

All-in-all, “Team” is a weak player in the defense of “Iggy Azalea.” Listen to the song below:

Agree or disagree with my reaction to Iggy’s new song? Let me know here or on Facebook and Twitter.

Fifth Harmony’s new song “Work From Home” is the ONLY “work” needed to be done so far this year.

Our little girls from X-Factor are grown-up working women now! The song  “Work From Home,” (from their upcoming sophomore album ‘7/27’) solidifies a place for Fifth Harmony in the current pop landscape as its favorite dessert dish. Just like “Worth it” being the group’s answer to Top 40’s previous infatuation with jazzy horns, much like  Jason Derulo‘s “Talk Dirty,” this song will sound (and taste) like a delicious dessert played after any of the many main-course hits Justin Bieber currently has in constant rotation on pop radio. They all sound great on the song, although it’s not really a vocal-driven song. The only criticism I’d have for it is that for the final chorus Lauren would have sounded a lot stronger and interesting on the adlibs for the finale (especially since she didn’t have a solo in the song) than the ever-present Camilla.

The girls’ music video sees the girls in their most sexually implicit roles ever. Filled with phallic symbols and imagery (pictured above: Dinah Jane holding out 16″ on a ruler to her male counterpart), this video takes place at a construction site for a home that Fifth Harmony is hard at work on. I’ve got to say, although I’ve always been apprehensive that they can sell this kind of image or a dance video, they really worked it out! They really shocked me with how sexy this video was. It is a great curve ball pitched though.

I guess performing their sassy dance song for a majority of last year has really paid off. They all look amazing and seem a little too comfortable in their new roles as suggestive women in pop. Watch their video below:

Overall, this song is my favorite single released this year. Fifth Harmony easily snatched the “work” crown swiftly from Rihanna‘s head and placed it upon theirs. Good job, girls. 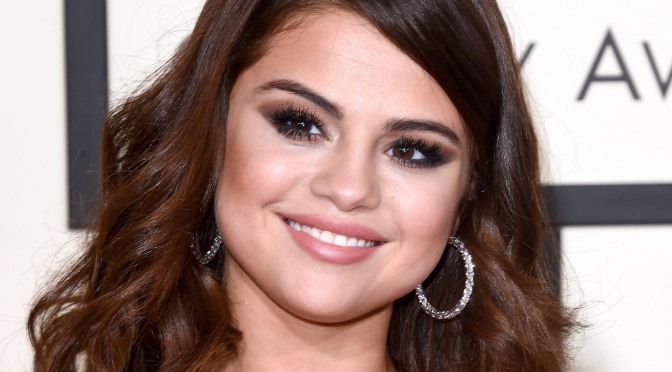 Selena Gomez is hard at work on her new WORLD tour and a new album!

Selena Gomez revealed during a Grammy interview with Zach Sang & The Gang (Watch: here) that she is already preparing for her next album! She divulged, “I’m already getting back in the studio with everybody that I love and I’ve been more inspired than ever.”

Throughout the interview she briefly speaks about the creative process of her current album ‘Revival’, admiring Jennifer Lawrence‘s career and working with Charlie Puth.

If you have tickets for her upcoming world tour, prepare for an intimate experience with Selena. Speaking of the tour, she admits, “It’s very, very genuine. The whole tour you’re going to feel so connected and I love that and I can’t wait for people to be a part of it.” — Sounds like an appropriate setting for her most personal album yet.

What style and sound would you love to hear Selena Gomez tackle in her follow-up to ‘Revival’? Let me know here or at any other social media platforms. 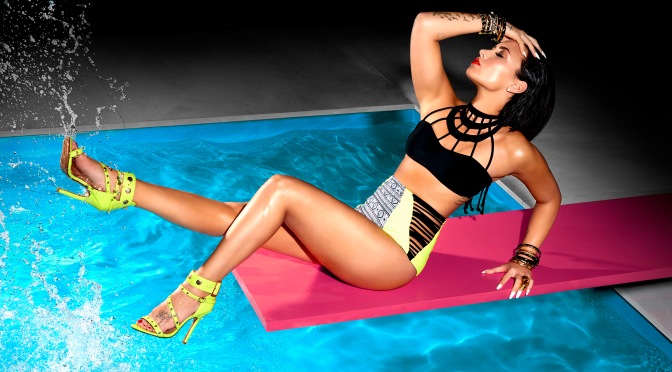 I approached this album with the thought of ‘Confident’ being Demi Lovato’s bid for her first Grammy nomination. The bar was set pretty high. Do I believe this is a Grammy-worthy collection of tracks? No, but I wouldn’t write-off this album entirely. Though few and far in-between, there are a few shining moments.

Expectations for this album were pretty high because she introduced it as her most “confident” and “best” album to date. I’m doubtful it took much confidence to produce an album that is a near-complete rehash of melodies and sounds from her previous albums. Nor are there any new lyrical themes to aid and intrigue to the vulnerability she’s also attempting to express. And if she’s not repeating herself, she borrows Iggy Azalea to give a Demi-version of “Black Widow” with their collaboration “Kingdom Come”.

Demi Lovato hits the triumphant mark she’s (always) aiming for with the standout mid-tempo track “Lionheart”, which has all the optimism and energy you’d expect from her. Few tracks like “Old Ways” and “Waiting for You” seem to benefit from an urban/trap influence under her Disney-rocker vocals. The album ends with “Father”, a well-written song about her late father, which really didn’t deserve that overzealous and overstated gospel production it was given.

‘Confident’ is hardly a departure from her previous albums. Lovatics should still be pleased with the offerings of this album. Although I wouldn’t bet a penny on her getting an album nomination at the Grammys, hopefully there’s a pot of gold or a genie lamp she can wish upon to have “Cool for the Summer” nominated in a pop category.

Selena Gomez has the arduous task of proving to everyone that she can be taken seriously as a mainstream pop star.

After her successful 4-album stint as a teen pop sensation, she’s left Disney’s Hollywood Records and signed to a proper music label, Interscope. ‘Revival’ is not as exciting nor has a fraction of the energy ‘Stars Dance’ had but it offers all the sensuality and depth its predecessor lacked.

Coming off the energy of ‘Stars Dance’, ‘Revival’ is like coming home after few drinks with your friends and finding your home lit only by candles with a trail of rose petals leading up to your bedroom. At first, you’re thrown off by the change of energy. But the curiosity moves you slowly through the candlelit foyer to the sensual vibes of tracks like “Same Old Love” and “Sober” before making it to the hallway. This is where Selena reminisces of previous relationships and offers the mysterious sounds of “Good For You” and “Camouflage”. Here, she proclaims she has, “so much shit to say.” You finally reach the bedroom to find it empty. The climax is not a lover but actually yourself with self-empowering tracks like “Survivors” and the finale track “Rise”.

The album takes your mind outside of the “schoolyard crushes” and “intro to house parties” environments that her previous teen albums seemed to have taken place. And this successfully allows Selena to tell her story as an empowered and mature young woman. Though mostly a sensual #BedroomMusic vibe through the entire album, tracks like “Body Heat” and “Me and the Rhythm” give a spark of fire to keep the album interesting and fun.

Overall, I think Selena Gomez perfectly executed her emancipation (in her own way) from the teen image she once had and offers a cohesive album for the more experienced listener. 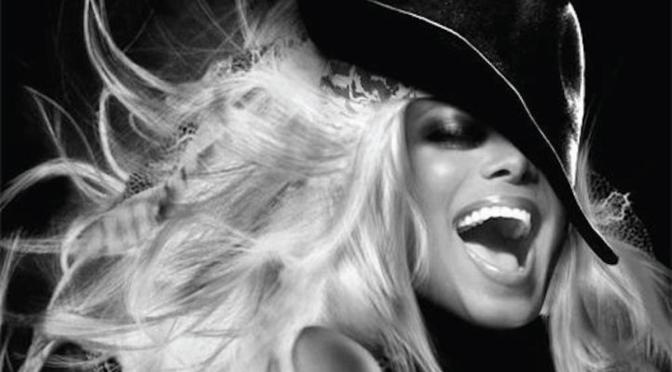 Basically this is the new veteran standard: Release an understated album to support a major tour. This album honestly gives me familiar feelings. She’s made a retrospective album with a lot of sounds similar to some of her previous work. The album’s theme is like getting a grateful hug from Queen Janet! So cheesy, but if you love Janet it is worth the commitment it takes to listen to the 17-track album. Janet has nothing to prove anymore. It’s almost like this album is asking you to prove something to yourself. Inspirations by Janet.