Just a good old fashioned song battle. Gwen Stefani scored her first solo #1 album debut with ‘This Is What The Truth Feels Like‘ on the Billboard 200. Sia‘s ‘This Is Acting‘ is a collection of rejected songs but is well-received with a string of fan favorite songs like “Alive” and “Cheap Thrills.” Watch the music videos for “Make Me Like You” and “Cheap Thrills” and pick your favorite song to proceed in the Q1 bracket!

Are you team Gwen Stefani?

Are you team Sia?

VOTE EVERY HOUR! Let me know which song you picked on The Pop Pyro‘s Facebook, Twitter and Instagram! Share the poll to help your favorite win! ROUND ONE OF POLLS CLOSE ON MONDAY APRIL 4th! 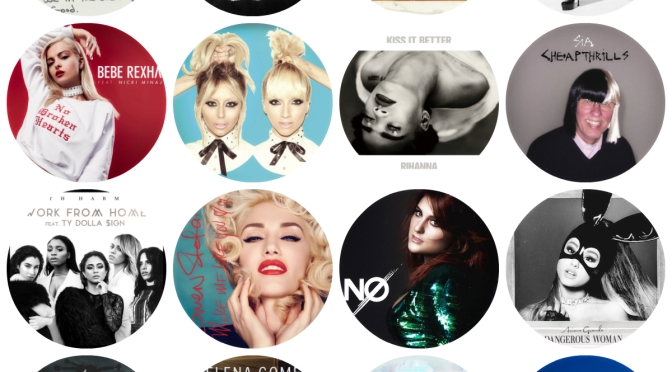 This is the official post for The Pop Pyro’s Q1 Song Tournament.

I will use this post to update the new battles as they are announced over the weekend. Check back here for the latest update on the bracket and find links to each battle’s individual post with videos. Polls for this round end Monday (April 4th) evening!

VOTING FOR ALL ROUND 1 BATTLES ARE CLOSED: