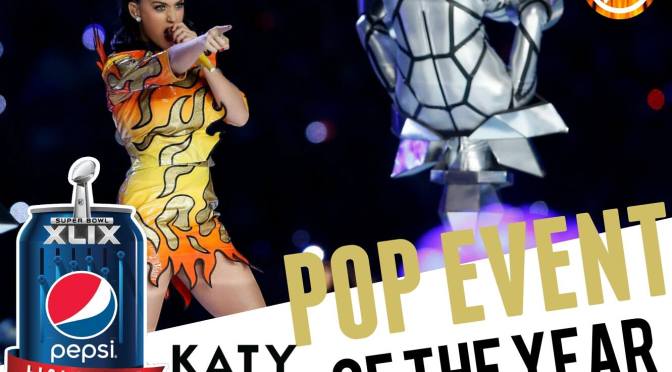 Lady Gaga, Rihanna and Katy Perry were all in-talks to take the stage this year at the 49th Super Bowl. Katy Perry landed the gig and did not disappoint.

The headliner for the 49th Super Bowl halftime show was announced at the end of the American Music Awards in 2014 and although it wasn’t a complete surprise at the time, Katy Perry dazzled the commercial spot with glitter, charm and ridiculousness. Basically everything I want in my life. Needless to say, I was extremely excited for the show. Katy Perry could have easily let me down during the show but ended up giving me one of my favorite pop shows of… ALL TIME.
There was almost an unfair advantage for Katy Perry because out of all the performers considered for the show, she has arguably the most anthemic catalog of hits under her belt, perfect for a sports event. So I was just waiting to see if she could deliver with a memorable performance considering she doesn’t have many iconic performances. This bitch came out on a giant shiny mechanical lion! Her energy was great and really got me excited for the rest of the performance. I’ve got to admit that her standing stiff on top of a lion afraid to move out of order or risk falling to her death ran a little long. But when she made it to the stage it took off and did not skip a beat.
When she reached the stage she was met by an army (literally an army of chess pieces) of dancers to sing “Dark Horse.” The entire stage and projection flooring surrounding it lit up and created this amazing 3-D illusion, immediately creating a larger than life environment for the show. She amazingly hammered through her hits like, “Teenage Dream,” “California Girls” and “Firework.” But you all basically have seen this performance so I don’t really need to walk you through how amazing the rest of the show was. If you need to refresh your memory watch the performance HERE.
What was particularly impressive and affective about this performance was how perfectly it celebrated Katy Perry; her career; and her music. Most performances focus on one song’s promotion or just a quick career medley. But this performance encompassed everything we love about Katy and magnified it by twenty! It truly felt less like a performance and more like a celebratory EVENT. It changed the way I looked at Katy Perry and was EXTREMELY entertaining. And to be completely honest, the entire time I was thinking how perfectly and necessary that it would be for Britney Spears to have this similar moment. So yes, Katy Perry’s Halftime show ignited my urgency and passion to spend most of my time in 2015 campaigning #BritneySuperBowl50.
My Change.org Petition for Britney Spears to perform at the 50th Super Bowl Halftime show has over 4,100 signatures and was featured and supported by many Britney Spears fan sites as well as NewNowNext.com and Buzzfeed.com.
Katy Perry’s performance and celebration during her Halftime performance solidified an appreciation I have for her as well as inspiring my fiery passion to demand that Britney Spears is given the same respect (and more) immediately in the music industry. For these reasons I picked the 49th Super Bowl Halftime Show as the “Pop Event of the Year.”